I expect you’re tired of hearing about the centenary of Alan Turing’s birth. His automated machines for cracking the German Enigma and Lorenz ciphers have enjoyed quite a lot of recent press, as has his pioneering work on the theory of computation. Without Turing, we would have bizarre, inefficient machines based on lambda calculus.

You’ve probably also heard the tragic story of how the British legal system condemned him to the mental torture of hormonal therapy. It is almost universally acknowledged that his death, involving a cyanide-immersed fruit of the genus Malus, was suicide. That’s right: a bunch of ungrateful ne’er-do-wells in Parliament decided that Turing’s unparalleled contributions to the war effort were no mitigation for his unconventional sexuality.

But what happened in his final years? It transpires that much of his research was in the field of mathematical biology, specifically in comprehending the cornucopia of patterns found in nature. For example, the phyllotaxis (arrangement of seeds, or ‘primordia’) in the common sunflower (Helianthus annuus) can be described by a startlingly simple formula. 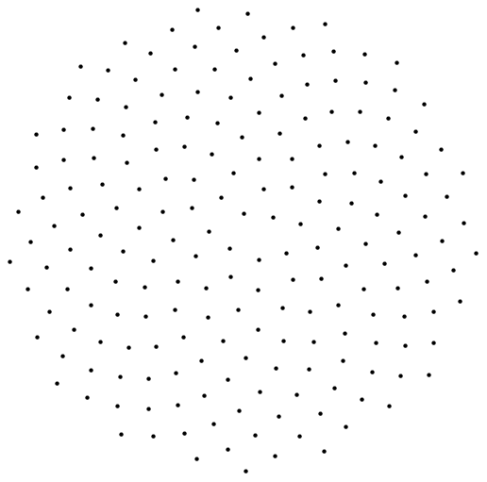 The formula gives a set of complex numbers, which, when plotted on the Argand plane, results in the pattern above. The points lie on a spiral known as the Fermat spiral.

Other patterns have more complicated mathematical descriptions. Turing found that Friesian cow patches and so forth can be modelled by a reaction-diffusion system, a partial differential equation designed to emulate chemical reactions. They can be regarded as a continuous (or, indeed, analogue!) analogue of cellular automata. Now, some really cool guys have developed software to explore these systems. Katie Steckles published an entry over at The Aperiodical: http://aperiodical.com/2012/07/ready-reaction-diffusion-simulator/

One of the cuter aspects of Ready (by analogy with Golly, its lightning-fast and more conventional cousin, which is an extension of the acronym ‘GoL’ meaning ‘Game of Life’, but that’s enough etymology for today) is the ability to emulate these systems on arbitrary meshes (or tessellations of 2-dimensional manifolds, if you’re a mathematician). For example, we can actually watch the emergence of zebra stripes on an actual … well, a horse, actually, but never mind! In a similar vein, here are Turing’s leopard spots on a rather ferocious lion: 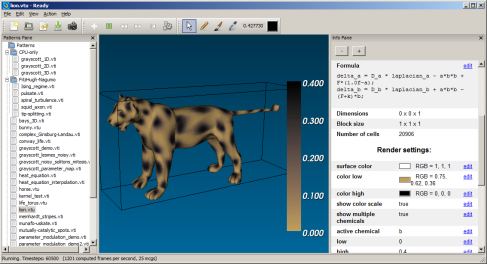 Tim Hutton (lead developer of Ready, and fellow resident of Derbyshire) is even adding support for three-dimensional tessellations of space, such as the face-centred cubic lattice of rhombic dodecahedra, the body-centred cubic lattice of truncated octahedra, and the Voronoi diagram of atoms in a diamond. You can read about all of this stuff in the Symmetries of Things, by John Conway, Heidi Burgiel and Chaim Goodman-Strauss. Anyhow, this nicely leads on to the next topic I wanted to discuss: the Poincare disc model of hyperbolic space. In layman’s terms, hyperbolic space is curved in the opposite way to a sphere. I’ll not go into the mathematics here, as I’ve already done so in my forthcoming book, Mathematical Olympiad Dark Arts. Can’t wait now, can you?

Anyway, as much as I enjoy promoting my own work, I seem to be digressing somewhat. The important thing is that Tim Hutton and I have been exploring reaction-diffusion systems on the Poincare disc in Ready. This seemed like a logical extension, since we’ve already experimented in the Euclidean plane and on the surface of a sphere. 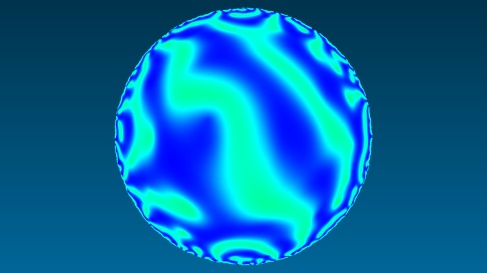 We can do better than Poincare, though. Embedding a curved surface on a flat plane is bound to create problems, which is why Greenland looks larger than South America on maps using the Mercator projection. A variant of a map which avoids distortion is a really revolutionary (no pun intended) three-dimensional visualisation of the Earth: a globe. Similarly, it is possible to use our third dimension to embed the hyperbolic plane without distortion. There are two approaches I know of:

People have crocheted coral reefs using hyperbolic geometry. There’s a massive one in the Smithsonian Museum, for example: http://www.mnh.si.edu/exhibits/hreef/. The aforementioned Katie Steckles seems to have got the wrong idea, since she ended up knitting a surface with overall positive curvature (http://aperiodical.com/2012/08/knitted-spiky-icosahedron/). Oops!

However, I am again deviating from the subject, which is the computer program Ready. It received a huge boost of popularity recently due to me (sorry, more self-promotion!) and my glider in a cellular automaton on a Penrose tiling. It was quite amusing that such a small construction won me $100 (thanks, Andrew!) and mentions in the New Scientist and the Aperiodical.

The original rhombus tiling glider was quite boring, travelling in straight (well, slightly wiggly) ribbons. However, Andrew (Trevorrow) and I have investigated the same glider on Penrose’s slightly more familiar tiling of kites and darts. This time, the glider orbits in loops of varying sizes in addition to unbounded fractal paths. The neat thing is that all of the loops have either pentagonal or approximate decagonal symmetry. A few of them are shown below:

For further details, see the paper I’ve just submitted to the Journal of Cellular Automata. (Thrice in one post? Wow, I’m really good at self-promotion! Wait — was that a fourth time? Damn you, self-referential statements!)

3 Responses to Are you Ready?